I believe some of you have already known about English Blogging Club weekly challenges which being held every Friday. This month’s theme is quite interesting because it related to something close to our childhood life. For your information, there are some rule changes according to the challenge. We, admins, will announced a big monthly theme and divide it into some small weekly topics. We hope this kind of things will eventually simplify our mind of creating some monthly great posts that might be linked to each other, in a sequence session, book chapter style, thoroughly continuous event, or anything you want to write.

Well, we are just trying to find a good formula after all. If there are some imperfection of implementing it, I think we could evaluate, give a constructive feedback, and improve it, again and again. Let’s try our best to begin with the very first big monthly theme, Childhood Memories. And this week’s topic is about our favorite cartoon character. Hmm… interesting…

Based on my version of dictionary, a cartoon is a form of two-dimensional illustrated visual art in any kinds of style. So, it is including every type of two-dimensional drawing arts. It doesn’t matter what kind of style that we define. Comic style, manga style, anime style, wayang, or even a stickman style. The most of my favorite drawing style has comes from manga or anime. I am not sure for the reason, but maybe it has something to do with our eastern culture.

Actually, I have already chosen one of my favorite characters. I think the character is quite famous with his reversed blade katana and a cross-shaped scar on his cheek. Yes, he is Himura Kenshin, the main character of Rurouni Kenshin or Samurai-X anime series, as you can see on my previous post.

But, a challenge is a challenge. 😀 I chose another favorite character of my own. You can guess it from the title don’t you. Yes, he is Conan Edogawa (kid version) or Shinichi Kudo (adult version). He is the main character of Meitantei Conan / Detective Conan anime series and manga. The story has been plotted for the first syndicate case called Black Organization that has been started to reveal by a young genius detective, Shinichi Kudo. Unfortunately, he has been caught in action during an investigation. Then they force him to ingest an experimental poison called APTX 4869 in order to kill him without leaving evidence. But, a rare occurrence of the side effect has been released. Instead of dying, he has had transformed into a child because of that poison. Ah… I am sure you already familiar with the rest of the story. What I want to share in this post is just about how a (fake) fanart like me doing a participation to enliven the atmosphere. Yes, drawing, sketching, and its kind. Not quite important tasks though.

Honestly, I am not an artist. I am just a master of none, the jack of all trades. 😀 So, this may not look like a professional tips. In advance, I apologize if there are any kind of unqualified methods which I use.

Unlike this guy, I am not talented enough to draw on paper. So, I preferred to use digital media as my main canvas. I love working using vector-based tools for drawing and sketching in digital way. It is because vector-based graphics has never influenced by any digital pixel dimensional problems. It can be resized to any dimension. Huge scale, micro scale, and every scale, a vector-based graphics will always have a proportional shape. And, this is my preparation:

For optimum result, we better use Graphic Tablet, or Touchscreen with Stylus Pen. But, an amateur like me has always tried to find a way of resolving anything with any means of cheaper alternatives. So, I am here just using my old Log*T*ch optical mouse. Hopefully it worked as I want.

One of my favorite vector tools is always Adobe Flash. Why? It is because Adobe Flash has the capability of rendering a good quality vector graphics and the usage itself is quite natural. In my opinion, Adobe Flash is easier to use than the other vector tools, like Adobe Illustrator, and Corel. But, it’s up to you. Different people might be different in styles.

Starting with a Doodle

To get it in handy, we must learn how Adobe Flash renders its graphical vectors. Thanks to Brush Tool so that we can create any sketch freely, but always nice in shapes. It is because Adobe Flash can render strokes with sketchy style automatically. We just do some sketch, and the rest of it will be rendered well. 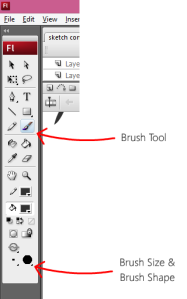 One thing for sure, the smoothness parameter should be set to a high value (100 max.). But, again, this option depends on every person’s drawing style.

Just try doodling, creating some shapes, handwriting, signing, or just create some scratch on the workplace, and anything you want to do to learn how the Brush Tool works. Try to change the size of the brush, or choose other brush shapes to feel the differences.

Before we start sketching, we better set the workplace dimension to a high resolution. With a high resolution, we can create more detailed vector shapes. But, actually it doesn’t matter. The vector scheme can be resized as we want without losing its quality, as I mentioned before. For my case, I set it to 2000 x 2000 pixels square.

This is the final version of Conan Edogawa character sketch. You may use it as you want, but please give some credits to this blog. Thank you.

This post is a submission for BEC’s English Friday, theme: Childhood Memories, 14th topic: Cartoon Character. If you want to know more, please join us! 😀